What is a graphic work? 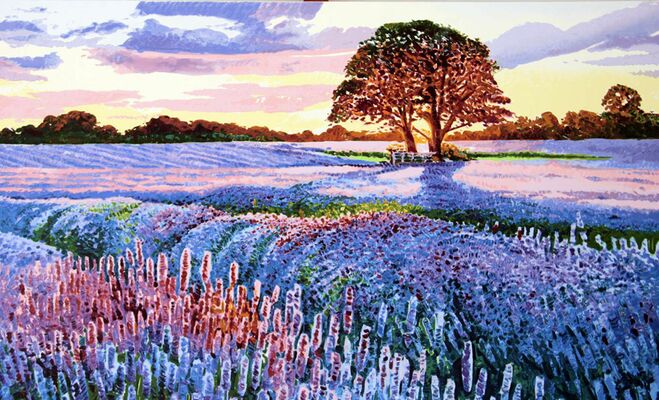 A bit of history

The various techniques for creating a graphic work are commonly distinguished according to the type of matrix: screen printing if the matrix is ​​silk, xylography if wood, etching if metal (zinc or copper), lithography if stone. This distinction is to be considered rather approximate since new techniques and new printing methods have been introduced. The distinction based on the way in which the matrix carries the ink on the sheet is more appropriate: the matrix can carry the ink either with the part in relief, or hollow, or flat. We will focus here on flatbed printing, in particular screen printing, which is the technique with which we prefer to work, later giving some hint to the origins of the other graphic reproduction techniques.

The origins of screen printing

Artistic SERIGRAPHY (since it had been practiced for centuries for serial use in China) also has known origins: towards the middle of the seventeenth century the Japanese Some Ya Yu Tzen invented the permeographic process that was known to the world only in the mid-nineteenth century for through the English, with the name of serigraphy. The procedure is elementary: the matrix is ​​a frame on which an open weave fabric is fixed which will then be waterproofed according to the design. During the printing phase, the ink pushed by a doctor blade (a kind of rubber stick) filters through the parts of untreated fabric and settles on the underlying surface. For this technique originally silk matrices were used (hence the name) while in recent decades synthetic materials have been introduced which, combined with new printing systems, allow extreme ductility of the whole process, even in multi-colored works. . The main feature of the screen printing technique is the possibility of using saturated and opaque inks, obtaining large homogeneous surfaces. It is now easy to understand how the original graphics have acquired an independent life, fully affirming themselves since the early years of the twentieth century with their values ​​and their own language and today we are witnessing the growing interest of the public

Art screen printing is the use of this technique to create works that stand out for their originality, preciousness and particularity to produce multiples of works of art.

The artist Anthony Velonis was the first to produce art serigraphs, in 1920 in the United States. Later other artists, such as Jackson Pollock and Marcel Duchamp approached this technique. We remember Andy Warhol with the face of Marilyn Monroe.

The process leading to screen printing includes various steps that we could divide into prepress and printing.

Prepress concerns the whole process that starts from the artist's request, from his original, the choice of colors and materials, to the production of the films and the preparation of the frames.

Each color will correspond to a film, so to make the complete print the various colors will be printed in sequence. In the production of films by hand, a high definition is required, a right amount of opaque red will be used in correspondence with the areas to be printed.

The frame consists of a metal frame with a stretched nylon fabric. For its preparation, an aqueous-based water-soluble photoemulsion is applied on both sides and this is dried.

The film is placed in close contact with the photoemulsion on the side intended to come into contact with the surface to be printed and is exposed to ultraviolet light. The part where the glossy is transparent, letting the light pass, allows the hardening of the underlying photoemulsion, while the part where the glossy has the covering red, not allowing the passage of light, prevents the hardening of the same, which remains water-soluble.

A wash with water dissolves the uncured photoemulsion, clearly revealing the open areas of the screen printing fabric. At this point, after drying, the frame is ready to be mounted on the printing machine.

PETIT PRINCE srl is your reference point for screen printing.

By purchasing from us you will be sure to give yourself an object of certain artistic value, quality, authenticity and made in Italy.

We have been guaranteeing quality for over 30 years!

Our company deals with screen printing by satisfying the demands of contemporary artists and using high quality materials.

All our works are hand-made by the masters of specialized Italian printing presses, starting from the selection of colors and their preparation, using valid and consolidated techniques.

We are specialized in particular in the production of graphic works with screen printing technique, working on various materials, such as canvas, fine papers of various weights, stainless steel plates, methacrylate plates and plates with gilding.

Each subject is characterized by unique colors and magnificent effects (flocking, glitter, etc.), lasting over time which, sometimes, to the eye and to the touch, give the reproduction the same thickness and the same changeability of the brushstrokes of the original painting (materic screen ).

In summary we are the right place to find screen prints of works by great artists, to enrich your home, your studio or, even better, your being.