Renzo Nucara (born in Crema, Italy, in 1995) gets his high school diploma in 1973 specializing in art subjects. He then attends the Brera Academy of Art in Milan. His first personal art exhibition is dated back to 1977 and was performed at the art gallery ‘Ticino’ of Milan.
During the 80’s, his works articulate around the Diary theme. Emotions, sensations, ‘daily facts’ are written off on canvas and regard backwards or fragmented phrases. The latter are intentionally located in a space between the explicit and the concealed as well as between what the artist wants to reveal and what he prefers to keep silent.
In the following years, the writings become signs while the canvas are replaced by tridimensional works. New materials are used, such as woods, discovered objects, transparent films, to create Boxes of Memories favoring a playful and ironic approach.
He goes back to bidimensional works, Reperti, that characterize his artistic production of the 90s. These works are forms that evoke objects already corroded by time, first carried out with paper-pulp and foam rubber and then with plastic material on which layers of colors, grains, pigments and elements of the natural world thicken.
In 1993, he founds with other five artists the Cracking Art Group. The chosen material is plastic that becomes the mean of a social and ecological commitment. Together with the group he takes part to the 49° Biennale of Venice, through theSOS World installation: more than thousand turtles of recycled and golden plastic occupying the gardens around the historic pavilions. He's back at the Biennale, with the Group, in 2011 and 2013.
Beside the performances and installations of the Cracking Art, Renzo Nucara develops his artistic research centered in the first years of 2000 on Resinfilm, resin stratifications, pigments, artificial and natural objects, which has become the basis of his recent plexiglas works, named Stratofilm,Shape and Lighting shapes. 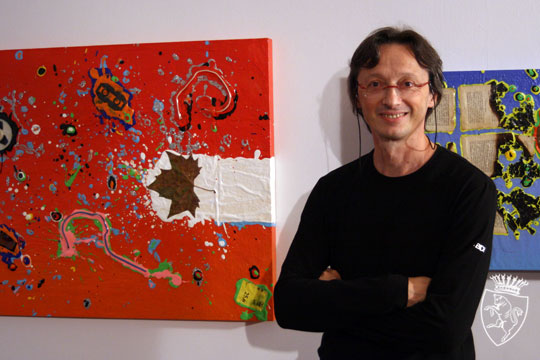 Mimmo Sciarrano comes From Reggio Calabria. In 1993 Sciarrano his in Paris deeppening his paint studies into the light and into the "sun colour", inspiring himself to the Neo-impressionists and Divisionists, long studied in the European museum.

He come back to ltal in 1988 to revisit his homeland and the Southern regions of ltaly.

The charm emanating from the Mediterranean landscape will translate into vibrant images of colors awarding him with the title "painter of the sunlight".

In 1992 he arrived in Provence, homeland of Paul Cazanne and region loved by many great artists of the pas, who, like Sciarrano, were attracted by the light and the colors of the Midi.

Sciarrano now alternates long stays in the South of France with his native homeland ltaly.

The landscapes of Mimmo Sciarrano break out from the canvas and impose themselves with the force of their own colors.

They are landscapes full of vibrant emotions. Sciarrano does not just reproduce what he sees, whether a coastal village, a lavender field, a marina or a flowering garden, but he transforms the image charging it with a vitality which is born from emotion and transcends into color.

Alongside, however, the technique which enables the artist to "build" the picture through detached strokes of pure color, Sciarrano also places in his image the sensations felt in the observation process.

Blocks of warm, brilliant and hot colors are juxtaposed by the artist, amplifying the nuances and the range of the tonalities.

This is an approach which reminds us of the Neo-Jmpressionism of Seurat and Signac. And the the emotions pour free on to the canvas, not just in the strokes, but in blazing color, in rich and warm sun-light.

Sciarrano distances himself however from the Pointillism, rallying himself more to the Fauves, accepting, as did the latters, Gaugin's invitation not to "fear" color, without though taking it to extremes. With his interest in the color, sticks with the pictorial message of Paul Cézanne but with his own autonomous and figurative interpretation. lt is the colored forms and not the drawing or the trait which create and give life to the world represented on canvas, teaches the great Provencal artist.

Nature manifests it self with its multifaceted palette.

The painter must employ the same strategy in order to reflect the emotions generated by it. Principally landscapes are inspired by the Mediterranean scene, told with a brushstroke.

Views of Positano, Capri, Ischia, ali villages on the Amalfi coast" which lie between sea and sky which the artist depicts, capturing on to the canvas the atmosphere of a sunny day.

Blah is consciously absent from Sciarrano's palette. Instead you will find a deep blue, a dark green and a hot red.

Even in the sunset reflects golden pink colored nuances. Sciarrano is not only captivated by the village, with its cluster of houses, the old villa and the fort. Nature has a deep impact on him too. Lust observe the house with the bougainvillea, where the purple of the A flovering bush puts the whole house in the background or follow' the intertwining of the flowering branches which fill the canvas.

Amongst his most recent picture, the Mediterranean gardens, the Nature depicted is only partly domesticated. lt is still the flora whit its exuberant colors which dominate the scene.

How do we than interpret the fioral element present in the Sciarrano's picture? Certainly not as simple decoratìons as the flowers reflect the artist's sensibility, shadows of his soul translated into colors.

Sciarrano hence transfer on to the canvas the sensations perceived from the external reality, without neglecting the hard fact, but reinterpreting it with a creative gesture.

From this the choice of the landscaped foreshortenings, live nature which keep reaffirming the present, the alive and the real.

Far from any conceptualism or stranger to any current trends, Sciarrano keeps his pictorial search, animated by a poetical impulse, which springs spontaneously and transfers this on to his canvas. The world fits then in a defined, limited space as the artist perceives it. A world which wants to keep on smiling.